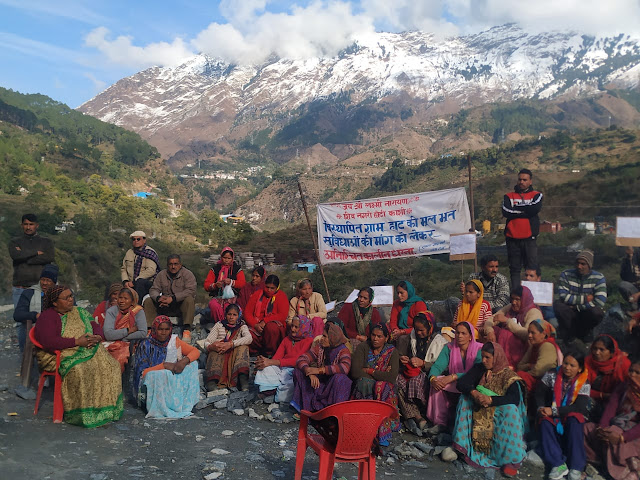 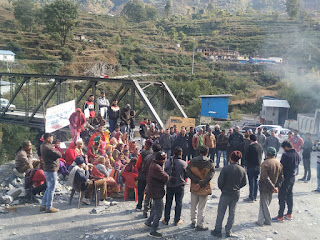 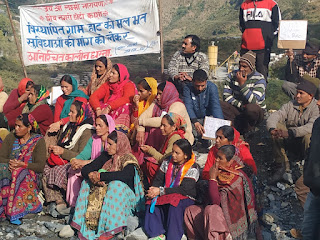 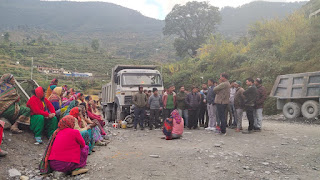 We welcome the order dated 5-12-2019  given by high court Nainital in the matter of THDC vs Govt of Uttarakhand.  Instead of solving the problem of Dam affected, THDC had filed a criminal writ petition in the court. But Court dispose of the matter without entertaining and asked THDC to go to competent civil court and  district magistrate Chamoli should at least e dea our to reconcile the difference between parties. We hope district magistrate Chamoli will and the the long waiting problems of them affected people.

On one hand, The World Bank is claims that the tunnel in which the Alaknanda River is to be dumped in the Vishnugad-Peepalkoti hydropower project is under construction and the work is well within time.
Reports are being prepared to take forward the dam work, bypassing its own policies of environment and rehabilitation. Recently the Central Government announced that it THDC India Limited would be sale. In this situation, with the onset of cold weather, when snowfall has already begun in Uttarakhand, people have been sitting on Dharna since November 25, stopping the work of the dam.
In the midst of snowfall, on the 19th day of the protest, people are raising slogans like - “World Bank go back”, “World Bank and THDC have ruined the Ganga”. It is known that Power House for the Vishnugad-Peepalkoti hydro power project has been constructing under Haat village.
People affected have sent letters to the authorities continuously for 17 years. However, there was no resolution and people continue to suffer. The rehabilitation site of Haat village was found to be inadequate. Moreover, nearby environment and culture are being affected in a way from which it is impossible to recover. Shiv Nagri Chhoti Kashi and Math Mandi are prime examples of this. The problems of the residents of Harsari Tok of Haat village are the same. The affected people have been sitting on a sit-in strike since November 25, stopping the work of Vishnugad-Peepalkoti hydro power project. THDC India Limited was notified about this series of events. The affected people sent them a letter on the 21st of November.
The locals also mentioned that of all the alternatives that THDC had suggested for the rehabilitation of Haat village, they were made to approve the compensation of Rs. 1,00,000 per nali of land (around 200 Sq. Meter) and Rs.10,00,000 in 3 installments {3 $ 3 $ 4 = 10,00,000}. The situation was such that they had to build houses on their own agricultural land cross the river Alaknanda in front of Haat Village without any plan. They claim that it would have been better had they been resettled as planned in an adequate residential settlement – a settlement where water, electricity, schools, temples, hospitals, post offices, banks and other facilities would be available. They say that it is written in the rehabilitation policy that the displacement will raise the standard of living of the displaced. Instead, their standard of living has sharply deteriorated. They are left scattered on their cultivated land. They also lack all the above facilities. As mentioned above, their standard of living was not raised, neither were the basic facilities of water etc. made readily available to them as promised. They have to struggle every day and it has caused them a lot of mental pain. The amount of manual labor is a lot. Their houses are promoted by World Bank as successful rehabilitation. Whereas the reality is that most of the houses are built by taking loans while some are still incomplete.
The affected have maintained from the very beginning that the then Haat village head and 9 others along with him had taken the decision to displace the entire village on the 26th of June, 2009 without the consensus of the village.
Residents of Harsari Tok claim that the officers and employees of HCC Company and their contractors come in ways which threaten the integrity and the honour of the women in their village. The officers harass them and the residents feel their lives are threatened. They live there under the shadow of fear. The people of the company try to file false cases against them, and tell them that only one case has been dismissed by the court and that they will destroy their lives by filing countless other false cases against the residents.
On 27.3.2019, the District Chamoli Court dismissed a suit filed by THDC Company. The court order describes how the company is using unjustified methods to suppress the residents’ reasonable demands.
Since the very beginning of the construction of this dam, the residents’ farming, their water and their quiet life has deteriorated. Even sleep has become difficult due to excessive blasting. They don’t know how they will sustain their households in the future. They are in a lot of trouble and bondage. These men and women wish to be given freedom. Stopping the work of the executive organization was the last resort. They say, this step had to be taken when there was no hearing.

Peoples’ demands:-
·        The people of Haat village and Harsari Tok should have the right to live respectfully.
·        The excessive and illegal blasting should be stopped so that there is no harm to their houses and water resources and fields etc.
·        Compensation for the losses they have incurred till date, crop compensation, replenishing of dried water sources and repairing of cracks incurred by the houses due to excessive blasting. This should be done immediately by THDC.
·        They should be guaranteed that the project will not have any effect on their lives and livelihoods, such as the drying of water sources.
·        Water, electricity, schools, temples, hospitals, post offices, bank access routes and other facilities should be made available to the residents of the displaced Haat village.
·        They should be provided employment according to eligibility, per family.
·        In the displaced Haat village, a program of augmentation and agricultural improvement should be carried out.
·        A small stadium for the children and youth should be constructed in the displaced Haat village. Computer center and library should be built.
·        The District Magistrate should put his seal on the guarantee in writing, to follow this whole agreement, a monitoring committee should be formed, comprising the villagers, the District Magistrate or her/his representative and THDC representative.
·        They should be provided with court, legal protection in the event of false lawsuits filed by the company in the future.
Rajendra Hatwal, Pankaj Hatwal, Naredra Pokhriyal, Tarendra Joshi, Anand Lal, Pitambari Devi, Narmada Devi Hatwal, Gupta Prasad Pant and Vimalbhai
Posted by Matu Jansangthan at 09:53 2 comments: 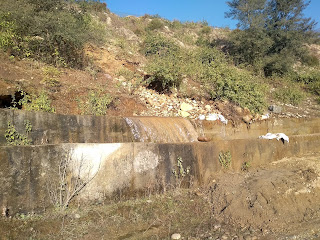 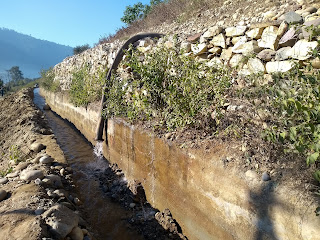 NGT sought report : Threat from the power channel of the Srinagar Dam project

The National Green Tribunal (NGT) has asked the Uttarakhand Government for a report on the leakage in the power channel and the resulting problems. The tribunal has sought this report on a petition filed by Uttam Singh Bhandari and Vimal Bhai.
In the petition, it is stated that the power channel (open canal) of the Srinagar Hydro-electric project, which is on the bank of river Alaknanda in Uttarakhand, is 4 kilometers long. This channel takes Alaknanda's water to the powerhouse to generate electricity. In 2015, there was a serious breach in the canal, and this resulted in damage to crops and houses in Mangsu, Surasu and Naur Thaapli villages in Tehri Garhwal district.
After this, an inquiry was done by the Wadia Institute in Dehradun, which submitted its report on 30th December 2015. The report recommended re-strengthening of the power channel and an investigation into the structural design. However, due to lack of requisite action, there was another breach in December 2018.
In this context, letters were sent to the District Magistrate, Tehri Garhwal and the Uttarakhand Government, but no response was received. The Hon’ble Tribunal has sought a report within one month via email from the Department of Energy of the Government of Uttarakhand, the Uttarakhand State Pollution Control Board and the District Magistrate, Tehri Garhwal, before the next hearing. The State Pollution Control Board has also been given the responsibility for coordination and compliance.
The order has been sent to the three agencies via email so that they can immediately follow it. In addition, the applicants have been asked to furnish a copy of the petition to the three agencies. We have delivered the papers ourselves to all three places.
Uttam Singh Bhandari and Vimal Bhai filed the petition in the National Green Tribunal through the lawyers of Life Society, Delhi, namely lawyers Rahul Chaudhry and Meera Gopal.
It is known that the power channel of the Srinagar dam has been continuously causing losses every monsoon since 2015. These villages, on the slopes between the power channel and the river, are always facing dangers. Residents of the area have raised these issues in their letters to the district administration and the company as well as in person. The issue has also been raised through the Local MLA. There has also been coverage of the issue regularly in the media. However, there have been no positive results yet. The dam company tried to repair the leakage then, but requisite action was not taken. The villagers were also not paid any compensation for their losses they suffered during this period.
Wadia Institute is a reputable institute located in Dehradun, which was asked to study the situation in 2015 by the then-MLA. However, the government took not cognition of the report upon submission and did not ensure that the company complied with the recommendations. This should have been done since the people in the three villages below are living in constant danger. Since the government took no cognizance of the matter even after three years, we had to approach the Hon’ble National Green Tribunal.

Our prayers to the National Green Tribunal:
1-Direct the Project Proponent to repair the power channel and plug all leakages, after conducting proper study of the power channel.
2-Direct the Project Proponent to implement the recommendations of the Wadia Institute vide its report dated 30.12.2015.
3- Impose environmental compensation on the project proponent, i.e. the Respondent No. 4 for the negligence in not taking proper measures to plug the leakage from the power channel and on the Authorities for not complying with their statutory duties in ensuring the safety of the lives of the residents of Villages Mangsu, Surasu, Naur Thaapli in Tehri Garhwal District, Uttarakhand who have suffered due to the said leakage.

We hope that soon the affected villages will be rid of the dangers of the power channel.
Petitioners
Uttam Singh Bhandari and Vimal Bhai

Posted by Matu Jansangthan at 23:28 No comments: 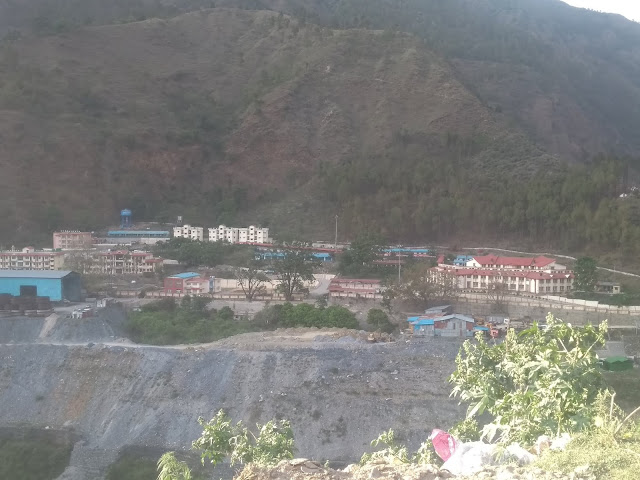 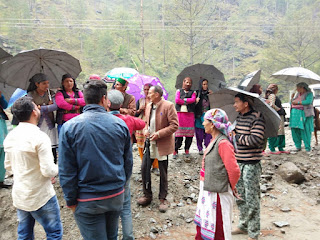 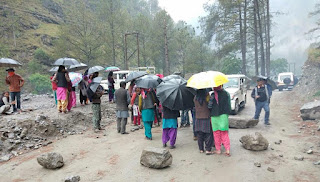 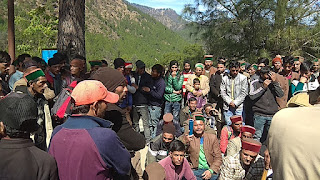 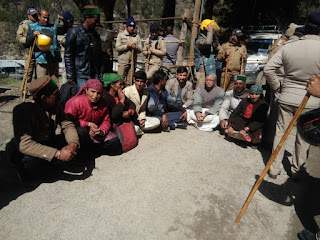 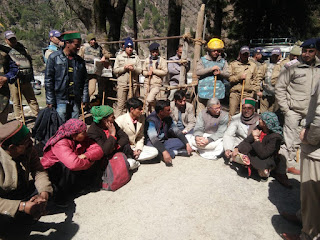 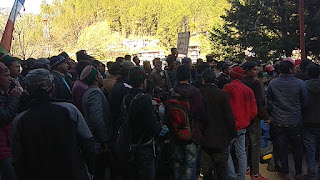 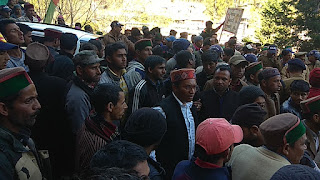 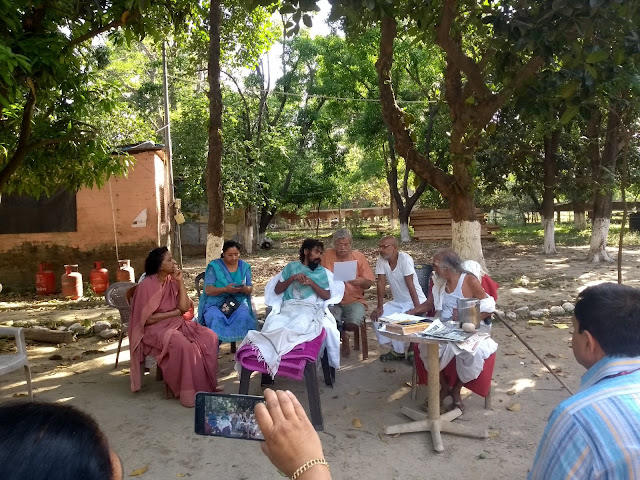 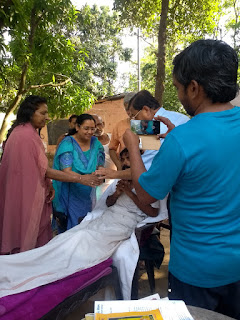 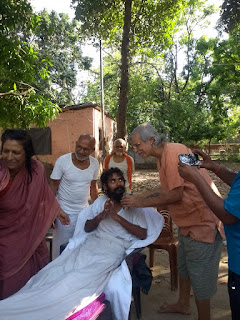 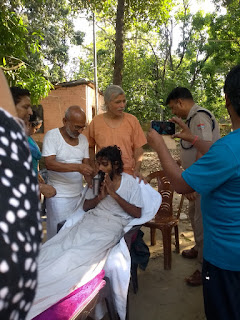